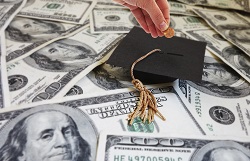 The ITT student loan discharge dates back to 2005-2016 to resolve federal student loan issues at the school. The Department of Education says it is working on new regulations that will permanently improve a variety of the existing student loan forgiveness programs.

The U.S. Department of Education is finalizing the cancellation of all remaining federal student loans that borrowers received to attend ITT Technical Institute (ITT) from Jan. 1, 2005, through the school’s closure in September 2016, according to a news release.

The $3.9 billion loan discharge for 208,000 ITT borrowers comes as student loan relief remains a hot button issue on Capitol Hill and for the Biden administration, which has recently released information about its Fresh Start program to eliminate negative effects for borrowers with defaulted student loans, and The White House has extended student loan payment and interest relief until Sept. 1, 2022, ACA International previously reported.

The student loan payment relief has been extended several times under both the Trump and Biden administrations.

Until there are any updates on that relief, the DOE reports its final discharge of loans for ITT borrowers follows its findings based on extensive internal records, testimony from ITT managers and recruiters, and first-hand accounts from borrowers. This includes borrowers who have not yet applied for a borrower defense to repayment discharge. These borrowers will have the federal student loans they received to attend ITT discharged without any additional action on their part, according to the DOE.

The department has already approved $1.9 billion in discharges for 130,000 ITT students to date. This includes borrower defense findings that ITT engaged in widespread and pervasive misrepresentations related to the ability of students to get a job or transfer credits.

Separately, the department announced an expanded window for borrowers who attended but did not graduate from ITT to receive closed school discharges.

The DOE’s ITT loan discharges are part of the Biden administration’s broader efforts to ensure better implementation of the student loan programs to get students and borrowers the benefits to which they are entitled, including loan forgiveness. These efforts also include enacting lasting policies to make college more affordable and prevent a future debt crisis by holding schools accountable for leaving students with mountains of debt and without the skills and preparation to find good jobs.

The DOE is also working on new regulations that will permanently improve a variety of the existing student loan forgiveness programs, significantly reduce monthly payments, and provide greater protections for students and taxpayers against unaffordable debts.

Biden’s 2020 campaign included support for student loan forgiveness, such as a fixed amount of cancelled debt per borrower and a proposed program to stop debt for undergraduates with federal student loans and “incomes under $125,000 per year who attended public institutions or historically Black colleges and universities (HBCUs) and private minority-serving institutions (MSIs),” ACA previously reported.

On April 6, 2022, the department announced Fresh Start to help eligible borrowers in default.

Borrowers with federal student loans in default will be able to reenter current repayment status and have other federal student aid benefits and protections restored that will increase their long-term repayment success. It will be in effect for one year after the student loan payment relief ends. ACA will provide more information on what the program means for student loan servicers in ACA Daily.

On Capitol Hill, ACA submitted a letter to the Senate Committee on Banking, Housing and Urban Affairs before a May hearing, outlining concerns with blanket student loan forgiveness policies and the impact they may have on borrowers and the credit-based economy.