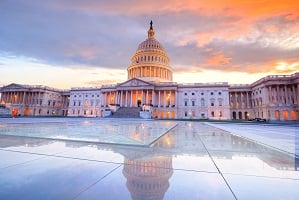 Members of Congress respond to power struggle between FDIC leadership with legislation to remove the Comptroller of the Currency and the Consumer Financial Protection Bureau director from the FDIC board.

After a leadership conflict over Federal Deposit Insurance Corp. (FDIC) board members’ authority to propose actions—in this case, a review and public comment on bank merger policies—without approval of the chair, members of Congress have proposed legislation to prevent “political meddling” at the FDIC.

The power struggle over bank mergers and the role of the FDIC board and chair in related decisions escalated to the point where Chairwoman Jelena McWilliams  Feb. 4, ACA International previously reported.

It started when FDIC board members Martin Gruenberg and Rohit Chopra, who is also director of the Consumer Financial Protection Bureau, posted a joint statement on the CFPB’s website Dec. 9 seeking public comment on the Bank Merger Act, ACA previously reported. McWilliams responded the same day that the bank merger review had not yet been approved.

U.S. Sens. Ted Cruz, R-Texas, Tim Scott, R-S.C., and Pat Toomey, R-Penn., introduced the FDIC Board Governance Reform Act on Feb. 2 to remove the director of the CFPB and the Comptroller of the Currency as permanent members of the FDIC Board of Directors, according to a news release.

All five seats on the board will then be subject to presidential appointment with the advice and consent of the U.S. Senate, with no more than three of the five board members allowed from the same political party. Additionally, explicit restrictions have been established regarding the limits of service by members of the board, and prohibitions of any appointees being members of the CFPB and the OCC.

“The recent hostile takeover at the FDIC has done lasting damage to the longstanding principle that financial regulators should operate free from partisan politics,” Toomey, ranking member of the Senate Banking Committee, said in the news release. “By removing the Comptroller of the Currency and CFPB director from the FDIC board and imposing term limits on all board members, our legislation will restore the independence and integrity of the FDIC.”

In the House, U.S. Rep. Blaine Luetkemeyer, R-Mo., proposed the FDIC Board Accountability Act in response to the leadership and decision-making debate at the FDIC last month.

The bill seeks to amend the Federal Deposit Insurance Act by requiring four of the FDIC board members be appointed by the president “with advice and consent of the Senate.” One member should have state bank supervisory experience, one should have primary experience working in or supervising depository institutions with less than $10 billion in total assets, and the director of the CFPB should serve as a non-voting observer to the FDIC board.

In her closing speech before resigning, McWilliams addressed the FDIC’s accomplishments in response to the COVID-19 pandemic and implementing modernized broker deposit rules, but did not cover the power struggle with the board, according to an article from Banking Dive.

Now that McWilliams has resigned, Gruenberg is serving as interim chair of the FDIC until President Joe Biden nominates a replacement who is approved by the U.S. Senate.

“While there are many pressing issues the FDIC will have to address this year, key priorities are: the Community Reinvestment Act; climate change; the Bank Merger Act; crypto-assets; and the Basel III capital rule,” Gruenberg said in a Politico article. “All of these priorities will require close collaboration among the federal banking agencies.”

Gruenberg was with the FDIC when the controversial Obama-era program Operation Choke Point—in which the FDIC and U.S. Department of Justice reportedly applied pressure to financial institutions to cut off financial services to certain licensed, legally operating industries, including debt collection—occurred.

After taking the role as chair, McWilliams—in response to a request from Luetkemeyer—called for an investigation into Operation Choke Point, ACA previously reported.

While the latest issues for the FDIC stem from the banking mergers proposal and the board’s authority to sidestep the chair’s approval, ACA is monitoring the issue for risks—including other measures like Operation Choke Point.