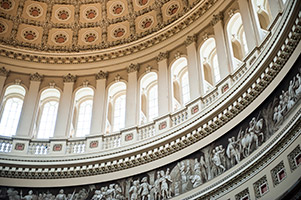 Now that Congress has passed the infrastructure bill, the stage is set for consideration of the Build Back Better Act with funding for affordable health care and a new privacy bureau-however, progress is pending until cost estimates are determined.

Congress is in recess this week and as the end of the year approaches, consideration of President Joe Biden’s Build Back Better Act will resume, especially after the passage of the bipartisan infrastructure deal Nov. 5.

That approval sets the stage for progress on the Build Back Better Act, according to The New York Times.

Congress voted along party lines to move forward on the Build Back Better Act this month, according to the article. The act includes approximately $2 trillion for expanding social and climate policies.

It was a procedural vote and moderates reportedly said they would vote for the Build Back Better Act, pending its official cost estimates from the Congressional Budget Office (CBO), according to The New York Times report. Those estimates are expected by Nov. 15.

However, if there is a delay, that could hinder progress on the Build Back Better Act before the end of the year and even before the midterm elections in 2022. Congress will be in recess for another week in November and for two weeks in December.

Of note for the accounts receivable management industry, congressional committees submitted proposals for the Build Back Better Act, including one from the House Committee on Energy and Commerce to provide $500 million to the Federal Trade Commission to establish and operate a new privacy bureau.

The funding would be used to hire technologists and other experts to review the FTC’s work on unfair or deceptive acts or practices related to privacy, data security, identity theft, data abuses and similar matters.