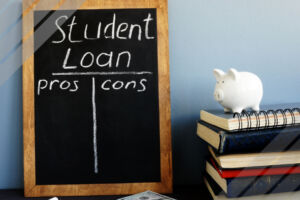 In an op-ed published on Yahoo Finance, Shelia Bair, former chair of the Federal Deposit Insurance Corp., who now serves as senior adviser to the Peter G. Peterson Foundation for Student Debt Smarter, shares how considering student loans as “financial aid” is the “root of the student debt problem.”

“Federal student loans, which account for 92% of the $1.6 trillion outstanding debt balance, have long been promoted or misunderstood as a gift from the government—a benefit to take full advantage of, not a contractual obligation that will impose a burden on the borrowers’ financial future,” Bair writes.

Bair writes that while disclosures have improved, information given to students is focused on “how much they can borrow, not how much they should borrow.”

As a solution, Student Debt Smarter from the nonpartisan Peter G. Peterson Foundation is available as an affordability calculator for prospective college students to understand the debt they can afford before they take out a student loan.

“As a former academic and college president, I have too often seen how students are encouraged to borrow to pay for college and then later struggle with loan repayment obligations they did not fully understand,” Bair writes. “Most college degrees lead to enhanced earnings and borrowing to pay for them can be smart—within reason.”

ACA provides resources for our members to support consumer education on topics such as student loans, identity theft, scams and incorrect information on credit reports, including the popular Know My Debt financial literacy website.

You can include the link to our Know My Debt website on your agency’s home page and give it to collectors to share with consumers. Know My Debt delivers clearly worded explanations to help consumers improve their financial literacy and resolve their debts.

On Capitol Hill, ACA submitted a letter to the Senate Committee on Banking, Housing and Urban Affairs before a May hearing, outlining concerns with blanket student loan forgiveness policies and the impact on borrowers and the credit-based economy.

James Kvaal, under secretary of education at the U.S. Department of Education, said at an event hosted by the Bipartisan Policy Center this month that a decision from the Biden administration is pending, MarketWatch reports.

“I think if there is a decision to do broad-based, obviously, that is something that would help a lot of borrowers,” Kvaal said, according to the article. “At the same time—and I think that the students and other advocates for broad-based would tell you—we also need permanent solutions.”

Other media reports say Biden is likely to announce a forgiveness plan in July or August, according to MarketWatch.

“Forgiveness along the lines of $10,000 per borrower would cost taxpayers at least $230 billion, with roughly 70% of the benefit going to those in the top half of the income spectrum,” according to estimates from the Committee for a Responsible Federal Budget, which also noted it would be regressive, worsen inflation and increase the cost of higher education.