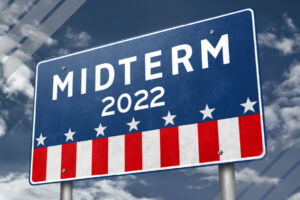 The 2022 midterm elections are next week. Here are the races and issues ACA is tracking, plus a look at early voting numbers and a debt collection ballot initiative in Arizona. It’s a great time to connect with officials on the ballot.

With nearly 500 election races coming up in just one more week, including 34 seats in the U.S. Senate and the entire U.S. House of Representatives—435 seats—2022 could mean another shift in party control in both chambers.

There are also several election races at the state level, including 36 governors, 30 state attorneys general and more than 6,000 state legislators on the ballot across the U.S.

Here are a few items ACA International is tracking since last week.

CNN reports that more than 13.8 million ballots have been turned in from 44 states—Florida has the highest number followed by Texas, California and Georgia. Florida has more than 1.9 ballots filed so far.

There are also 132 ballot initiatives in 37 states, according to Ballotpedia, and one in Arizona on debt collection is on ACA’s radar after members’ advocacy to stop the measure.

The ballot initiative would limit the interest rate on medical debt to 3%, according to the article, but the rest of the items in the proposal would apply to all consumer debt. It would also raise homeowners’ homestead exemption from $150,000 to $400,000.

Protect Our Arizona, an accounts receivable management industry-supported group opposing the initiative, sought to keep it off the ballot through legal challenges.

ACA Board member Christian Lehr, president of Healthcare Collections-I in Phoenix, recently appeared on local radio show, The Think Tank, to discuss the initiative. Read a recap of the interview and background on the ballot initiative in ACA International’s coverage.

Democrats have a narrow 221-213 majority in the U.S. House of Representatives, meaning just eight seats separate them from the Republicans.

Republicans only need to flip five seats to gain control of the U.S. House of Representatives. Considering not a single Republican incumbent lost in the 2020 election, and they were able to pick up 13 seats despite losing at the top of the ticket, Republicans are well poised to make that happen.

Signs point toward a likely change in the House, but it is still a toss-up in the Senate, said ACA’s lobbyist and shareholder at Brownstein Hyatt Farber Schreck Leah Dempsey.

According to Politico, if Republicans succeed in the Pennsylvania seat for retiring U.S. Sen. Pat Toomey and in Wisconsin, they can likely flip the majority in the upper chamber.

More than 40 House members have announced their retirement this year, including 29 Democrats and 13 Republicans.

How does this affect the accounts receivable management (ARM) industry, and what can you do?

The Biden administration is currently enjoying a Democratic trifecta—the presidency, the House and the Senate, and President Joe Biden has been able to move a good deal of his policy priorities with minimal input from Republicans.

Should either, or both, of the chambers change control, Biden and his administration would be more limited in what they can do.

Additionally, if either or both chambers flip, passing legislation will become difficult, if not impossible, without significant buy-in from Republicans, and if neither chamber flips, you can expect to see similar bills and priorities as you saw this Congress.

Are you interested in connecting with federal and state lawmakers?

We have resources to help you get started and to share with your representatives about the accounts receivable management (ARM) industry before and after the election.

First, take a look at ACA’s advocacy book for members, which reviews the top industry issues. An update to the book is coming later this year.

Topics in ACA’s advocacy book apply at the state level, too.

Find common ground with legislators on a personal level, such as about family or common interests, and then sharing about your business. Try talking about community service that is important to you or a local event you attended as an ice breaker.

Then educate them about your business. This could include how you got started in the ARM industry, how long you’ve been doing it, how many people you employ, the diversity of your workforce, and the types of clients you provide services for.

Join Washington insiders Nadeam Elshami and Brian Wild as they provide bipartisan and bicameral-based predictions about the election, which falls less than one week after ACA’s Fall Forum, Nov. 2-4 at the Radisson Blu Chicago.

Elshami, who served for 25 years in Congress, departing as chief of staff to Speaker of the House Nancy Pelosi, D-Calif., and Wild, who worked in the White House in the Bush administration and as chief of staff for U.S. Rep. Pat Toomey, R-Pa., as well as in many other roles as a congressional staffer, will base their election predictions on their unique insights from both sides of the aisle and experiences with campaigns.

This discussion is a must-see for everyone interested in what the future political environment holds, which will have major implications for the ARM industry.

Heading into the 2022 midterms, ACA and ACPAC, ACA’s political action committee, have been focused on getting out the vote among members.

Elections can make a difference for our industry’s future. To learn more about how ACA and ACPAC are fighting to make sure elections are making a difference at the federal level, visit www.acainternational.org/advocacy/political-action.

For more on the midterm elections, read the Midterm Election Primer in the March/April issue of Collector magazine.