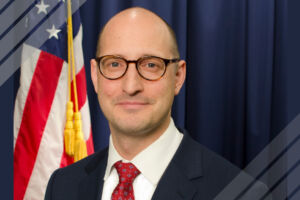 Phillips is one of two Republican commissioners on the Federal Trade Commission. His resignation in the fall, if before the midterm elections, could lead to a divisive process for a new nominee, according to media reports.

In the third year of his seven-year term, Noah Phillips has announced his resignation from the Federal Trade Commission, Politico reports.

He said he plans to resign in the fall, according to the article, and announced his decision to FTC staff on Monday.

“While Phillips said his primary reason for leaving was…about prioritizing his family, he said one factor was his sense that other commissioners weren’t open to discussion and compromise,” Politico reports.

The FTC has a 3-2 Democrat majority, including Democrats Lina Khan, chair of the commission, Alvaro Bedoya, who replaced Rohit Chopra when he was appointed director of the Consumer Financial Protection Bureau, and Rebecca Slaughter. Christine Wilson is the other Republican commissioner.

Politico reports that since Khan was appointed chair last June, Phillips and Wilson “have openly sparred with her over policy and enforcement priorities and her management of the agency.”

Here is what else you need to know about what’s next at the FTC after Phillips resigns:

“I appreciate Commissioner Phillips’ service at the Federal Trade Commission. I commend him for his work to protect consumers from unfair or deceptive business practices and for his commitment to enforcing the law as intended by Congress. I wish him all the best in his next endeavor.”

Wicker is also expected to weigh in on appointing a new commissioner. He initially supported Khan’s nomination, but has expressed concerns over her leadership, according to Politico.