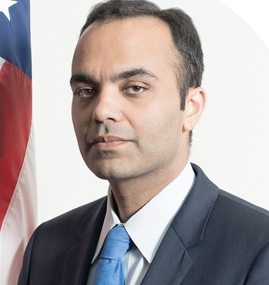 In a comprehensive campaign against the Consumer Financial Protection Bureau, the U.S. Chamber of Commerce today announced multiple measures related to actions by Director Rohit Chopra, according to a news release.

The chamber notes Chopra, in various speeches, has:

Through the campaign, the chamber “is specifically objecting to several unlawful actions including Chopra’s intentions to change rules without accountability, injecting great uncertainty into the market therefore causing financial companies to limit the types of mortgages, car loans, and personal credit they can offer consumers. Chopra has also proposed outright bans on certain products and has stated his intention to restructure the industry, ultimately hurting consumers by limiting choice and diminishing competition.”

As part of this effort, the U.S. Chamber of Commerce is launching a digital ad campaign highlighting Chopra’s “outsized view of his role and radical agenda, subject to no accountability.”

It is also filing six Freedom of Information Act requests for the bureau’s current procedural manual and records relating to the agency’s communications with the White House on President Joe Biden’s July 9, 2021, executive order on competition, among other requests for additional transparency.

The chamber is also issuing two letters from its litigation center detailing the CFPB’s “unlawful and imprudent actions.”

“Director Chopra is attempting to use the CFPB to radically reshape the American financial services sector,” said Neil Bradley, executive vice president and chief policy officer at the U.S. Chamber of Commerce in the chamber’s news release. “Rohit Chopra has an outsized view of the CFPB’s role and the [d]irector’s power. By willfully mischaracterizing the state of competition in the market Chopra is laying the groundwork to force the financial services sector to comport with his personal vision of the appropriate size of companies and what products and services should be offered and under what conditions. No previous CFPB [d]irector has thought they had such power. Rohit Chopra’s radical agenda and reckless actions will only hurt consumers, businesses, and our economy and he needs to be held accountable.”

The chamber’s campaign this week comes as the CFPB has recently issued an interpretive rule on states’ authority related to the Fair Credit Reporting Act and an Advance Notice of Proposed Rulemaking (ANPR) on credit card fees, which ACA International reports on here.

ACA is reviewing the ANPR for any impact on the accounts receivable management industry as well as the recent interpretive rule, which mirrors the CFPB’s actions referenced in the chamber’s news release.

“ACA International understands well the points raised by the Chamber of Commerce, especially the desire to get back to long-standing processes to involve all relevant stakeholders, and the importance of using recent, relevant and verifiable data in decision-making to ensure any changes don’t lead to negative unintended consequences for regulated entities and consumers. ACA continues advocating on our similar concerns with the CFPB’s inappropriate use of rhetoric toward the ARM industry on behalf of members in recent months,” said ACA CEO

Scott Purcell. “To continue to use broad inflammatory statements that imply entire industries are acting with malice and mischievousness, or that specific organizations are based only on pre-trial accusations, undermines consumers’ faith in legitimate institutions that are there to help them, and doesn’t solve any genuine issues that may exist.”