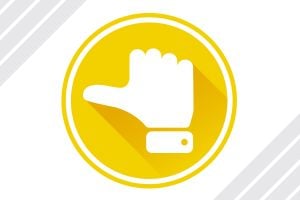 A consumer was considering buying a vehicle from a dealership. She provided information online and via telephone to a dealership and a website that provided information to the dealership. The consumer had two cellphone numbers at the time and called the dealership using her phone number ending in 6590 to ask the dealership about a vehicle. She then provided her information on the dealership’s website. The website required the consumer to click a box next to “I agree to Terms of Service, Privacy Policy, and Privacy Notice” to continue to the next page in the process. These appeared in a light red color to indicate hyperlinking, and the other words in the statement appeared in black. The hyperlinked agreements contained passages notifying the consumer that her information could be used “for our marketing purposes” and “for our affiliates to market to you.”

The consumer filed a class-action lawsuit claiming that the prerecorded voicemails violated the Telephone Consumer Protection Act and caused injuries, including, “invasion of privacy, aggravation, annoyance, intrusion on seclusion, trespass, and conversion,” because the prerecorded voicemails made the consumer “stop what she was doing and listen to the pre-recorded messages.” The dealership moved for summary judgment, claiming that ringless voicemails are not calls under the TCPA, the intangible harms that the consumer alleges are not a “concrete injury” sufficient to support Article III standing, and even if ringless voicemails are calls and the consumer has standing, she provided prior express written consent to be contacted.

Next, the court looked to the dealership’s claim that the consumer lacked Article III standing to bring her claim. The dealership argued that the intangible harms that the consumer alleged are not a “concrete injury” sufficient to support Article III standing. The court stated that it followed the reasoning in Gadelhak, which held that an unsolicited call to a consumer’s cellphone constitutes a concrete injury for a TCPA claim. The court stated that it “[t]herefore, [] conclude[d] that receiving a ringless voicemail supports standing under Article III for a TCPA claim so long as there is a connection to a traditional common law injury.”

The court also found that while she revoked consent to be called at the 0677 number, she did not revoke consent for the 6590 number. Therefore, the dealership acted consistently with the consumer’s prior express written consent.

The court granted summary judgment and dismissed the action.

While ringless voicemails are not directly discussed in the TCPA, several courts have held that they are considered calls and are actionable under the TCPA. Therefore, if your business uses this type of technology, it still needs to have prior express consent to leave ringless voicemails.