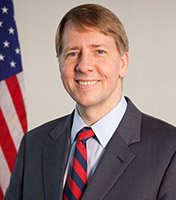 The U.S. Department of Education announced this week that it has selected Richard Cordray as the chief operating officer of Federal Student Aid under the Biden administration. Cordray is the former director of the Consumer Financial Protection Bureau and the former Attorney General of Ohio.

Federal Student Aid is responsible for managing the student financial assistance programs authorized under Title IV of the Higher Education Act of 1965, including grants, work-study and loans for students attending college or career school, according to a Department of Education news release.

“It is critical that students and student loan borrowers can depend on the Department of Education for help paying for college, support in repaying loans, and strong oversight of postsecondary institutions,” U.S Secretary of Education Miguel Cardona said in the news release. “Cordray has a strong track record as a dedicated public servant who can tackle big challenges and get results. I am confident that under his leadership, Federal Student Aid will provide the kind of service that our students, families, and schools deserve.”

Cordray will serve a three-year term with the Department of Education and his appointment does not require confirmation in the U.S. Senate, according to Politico.

Meanwhile, another former CFPB official is awaiting confirmation in the Senate to be the bureau’s new director.

In March, the Senate Committee on Housing, Banking and Urban Affairs voted 12-12 on Chopra’s nomination to lead the CFPB, ACA International previously reported.

In an interview with Politico following the announcement of his role at the Department of Education, Cordray said he and Chopra have a “close working relationship already. So in many ways, I think this is a perfect opportunity for us to make very good progress forward on thinking about how we finance and make available higher education in the United States to people for whom it’s more and more a critical step forward in their lives.”

Projects under Cordray’s leadership at Federal Student Aid are expected to include managing the Department of Education’s student loan forbearance, which is in place until at least Sept. 30, 2021, and another possible extension or the process for borrowers to start paying again.

There have also been talks of some student debt cancellation under the Biden administration, but recent media reports, including Yahoo Finance, say the president hasn’t made a decision on the matter.

According to the Politico article, Cordray said it was too soon to say anything about “what his appointment means for where the Biden administration will come down on the student debt cancellation issue.”