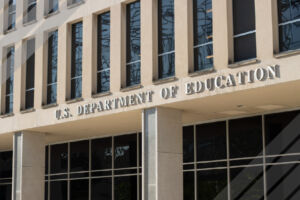 The final regulations, which go into effect July 1, 2023, will expand loan eligibility and remove barriers for targeted debt relief.

The U.S. Department of Education (DOE) released final regulations on Monday that streamline and improve the rules for major targeted debt relief programs, according to a press release from the department.

The regulations aim to expand eligibility, remove barriers to relief, and encourage automatic discharges for borrowers who are eligible for loan relief because of a school closure, disability or a falsely certified loan, the release states.

“Today is a monumental step forward in the Biden-Harris team’s efforts to fix a broken student loan system and build one that’s simpler, fairer, and more accountable to borrowers,” U.S. Secretary of Education Miguel Cardona said in the release. “These transformational changes will protect students who’ve been cheated by their colleges from the bureaucratic nightmares of the past and ensure that all our targeted debt relief programs live up to the promises made by Congress in the Higher Education Act. We’re also protecting borrowers from higher costs by limiting the practice of tacking unpaid student loan interest onto their principal balances.”

The new regulations should make it easier for students who have been defrauded by their schools to have their student loans cancelled by the government through the borrower defense process, and allows the DOE to make a decision on these requests for relief as a group, rather than requiring each borrower to individually prove that they were harmed or misled by their school, according to an article from CNBC.

“Borrowers entitled to debt relief under the Higher Education Act should be able to get it without wading through red tape and confusing tricks and traps,” said Under Secretary James Kvaal in the DOE press release. “The regulations announced today will streamline a needlessly complicated system and give borrowers a simpler and more often automatic path to the discharges they deserve.”

Higher education institutions that accept federal student aid will also be prohibited from requiring borrowers to sign mandatory pre-dispute arbitration agreements or waive their ability to participate in a class-action lawsuit over their borrower defense claim under the rules.

The Biden administration also plans to remove the practice of interest capitalization, in which unpaid interest is added to the borrower’s principal, according to the DOE.

Additionally, the Public Service Loan Forgiveness Program, which allows public employees and those who work for certain nonprofits to have their debt forgiven after a decade, will be improved so that previously uncounted months due to economic hardship and late payments will be eligible for relief.