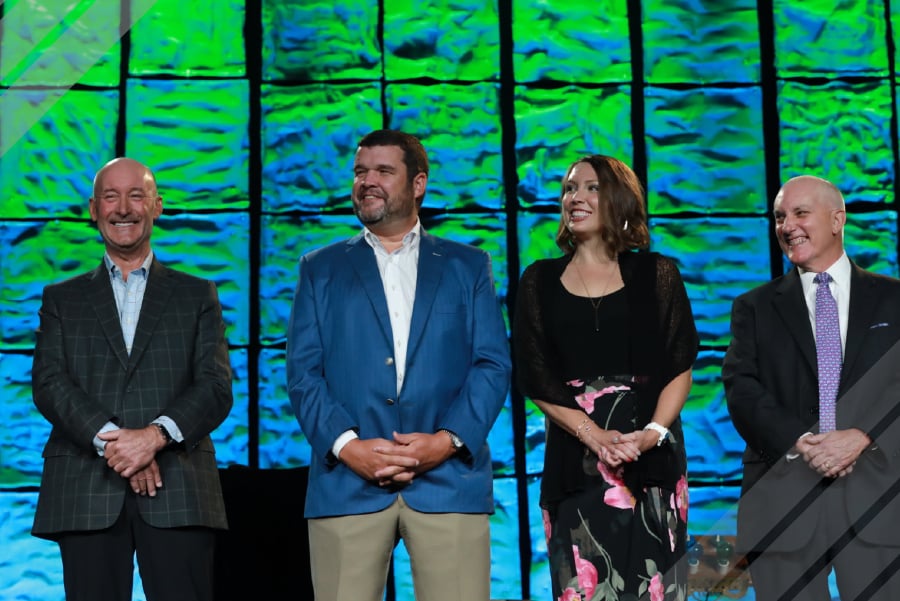 Amid congratulations from industry peers-as well as “Seinfeld” alums-Kevin Baich was formally inducted as the new president of ACA.

ACA International’s Convention & Expo concluded Friday in Las Vegas with a celebration for 2021/22 President Kevin Baich. Emceed by Past President Roger Weiss, the night opened with a reception and dinner, installation of officers on ACA’s Board of Directors and Baich’s vision for his year as president.

Weiss kicked off the evening by introducing a distinguished roster of ACA past presidents and current leaders, who were greeted by an enthusiastic crowd.

“Kevin, we're thrilled to be here celebrating with you,” Weiss said. “We're excited for the year ahead under your leadership.”

Joining Baich on the dais were Immediate Past President G. Scott Purcell, and the 2021-22 Board officers—President-Elect Courtney Reynaud, Treasurer David Williams and CEO Mark Neeb.

After recognizing Purcell for his outstanding service to ACA members as president, the gavel was passed to Baich, who delivered a forward-looking speech marking the start of his year-long term.

Baich, vice president of Day Knight & Associates in Ballwin, Missouri, told attendees that one of his main initiatives as president is to get even more people involved in the association.

“ACA is a member-driven organization with many opportunities to be involved and to share your ideas and talents for the betterment of our industry and, in turn, the organization,” he said. “As we hopefully exit the global pandemic, your involvement is even more critical. We have many challenges ahead: Implementation of Regulation F in a short 123 days—officially today—an involved study on how ACA is governed, continued effects of the pandemic on consumers, labor shortages and who knows what else.”

He described his first efforts volunteering with ACA, and how it led to many unexpected and wonderful experiences and friendships. He also assured members that participating in ACA can be as simple or as complicated as they want.

“Being involved does not mean you’re required to devote more time than you deem appropriate,” he said. “Leadership … comes in many forms. It can be as simple as telling that person you just met at a cocktail party or in an elevator how through the efforts of our industry, we save the average American consumer $706 a year through the lower cost of goods and services, or about the jobs we provide, or the untold philanthropy in our communities.”

At the end of the night, magician Murray Sawchuck from America’s Got Talent performed a series of amusing and entertaining magic tricks, using several good sports from the audience as willing participants.

Plans are already underway for the 2022 Convention & Expo in Orlando, Florida July 20-22. We will see you there!